Back Roads to Pioneertown 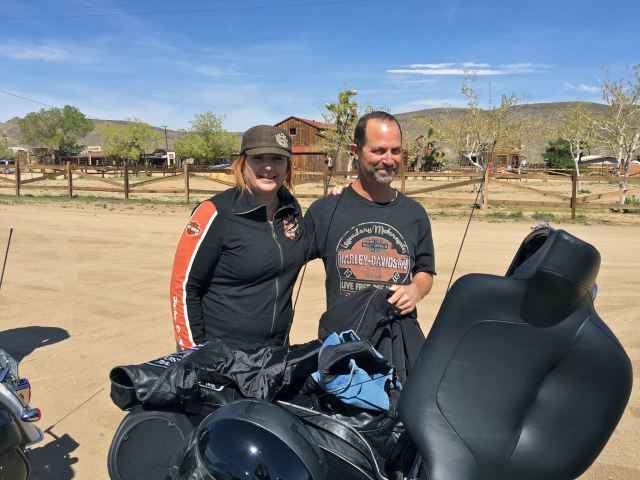 The ride captain promised roads we had never seen, and our chapter, the Inland Empire Harley Owners Group, was ready to accept that challenge. At the check-in, I was still yawning from the Daylight Savings Time clock change. My husband fiddled with settings on the stereo, twitching with nervous energy. He always awoke by 4:00 am on the days we rode. I shared hugs and greeting with the other women while my husband and the other men settled for a head nod. A few ran into the dealership for a last minute restroom stop, while others downed their last swig of coffee. Then the road captain gave the signal, and we all layered up our leather and lined up in the parking lot.

Two by two, in staggered formation, our Harley-Davidson motorcycles roared down the street, the sound echoing off the surrounding buildings. A few blocks later, we poured onto the freeway, fitting ourselves into the jigsaw puzzle of traffic. We rode in small clumps at first, eighteen bikes too many to stay together in one group. Eventually open space allowed us to line up in staggered formation as we endured the mindless repetition of merging traffic and slow trucks, road construction and oblivious drivers.

Cloud topped mountains drew closer, appearing to my bleary eyes as brownies covered with whipped crème. Frozen whipped crème. Shivering, I zipped up my heavy leather jacket and pulled the collar of my layering jacket over my chin. Promised sunshine now hid away, and the threat of icy rain loomed over us.

Hand signals rippled down the line of bikes as we approached our exit. Not for the first time, I marveled at these independent rebels, Harley riders, obediently following each other, submitted to the safety of the group. At the end of the ramp, we paused, free from the freeway’s chaotic energy. One by one the pack turned onto a narrow winding road that carved through the mountains toward the high desert valleys.

Our Ultra Limited touring bike danced to the rhythm of curves and dips as we traveled through land that scorned man’s ambitions. A sheer rock wall peered at us from the left with a lofty arrogance. These rocks stood witness to Native American tribes roaming over them on horseback, and they would still stand after our passing. The twisty roads forced us to ride slowly, slowing our pulses, slowing down time. Bike following bike, the road leading us on.

Suddenly the road spit us out into a wide flat valley and straightened itself out. The bikes stretched their legs and gained speed. Gradually I grew aware of an ominous grey wall of mountains on our left growing closer as we rode. As I looked behind and ahead of us, I could see no end to the ridge. Yet our road seemed determined to connect with it. I wondered how we would cross its summit. Would the road lift us to the top of that wall or would we discover a blasted tunnel, man’s victory over the mountain?

Miles sped by in our race to the wall, and soon I could see the end. The wall sloped down before it merged with another ridge, and into this opening the road stretched through. The bikes climbed over it without strain, and dropped down into another flat valley. The mountain peaks on our right were dusted with snow, and I knew that on the other side, snow boarders were riding rails and practicing jumps in the fresh powder. However this side held dry cracked rocks and Joshua trees reaching toward the bright blue sky. No snow or water here, except trapped behind a dam.

The bikes passed white fenced ranches that eventually led into small groups of houses and buildings, towns so small they seemed out of place in overpopulated southern California. A man in his electric wheelchair rumbled on the dirt shoulder. Where he was headed on a straight narrow road with no sidewalks I couldn’t guess, but surely he was kin to the determined men who settled this desert. The line of bikes pulled into a gas station, and we stretched our legs and gulped some water. Although it was not hot, the air was so dry it crackled.

The road called us on, and we descended into another valley, this one much hotter and dryer than the last. Pink mountain peaks lined the horizon on the left. A smudge in the distance slowly revealed to be our lunch stop. Wooden buildings, including a saloon front, saddle shop, and a jail, formed the skeleton of an old western movie set, now a tourist attraction and motorcycle destination. My husband pulled into the dirt parking lot and parked our bike at the end of the row, just like cowboys would have tied up their horses in front of the saloon.

I carefully dismounted our Harley, stiff muscles protesting. We peeled off our helmets and layers of jackets and leather chaps. Every face revealed a wide smile. Even though we had just ridden for hours over twisting roads and through dry dusty towns, I felt energized. My husband and I followed the line of riders to the restaurant. It was time for food and drink, tales and jokes, friendships forged in adventure.

My day job as an elementary school teacher in Southern California supports my writing and Harley riding habits. My YA fantasy novel The College of the Crones, recently won an Honorable Mention Award at the Society of Children's Book Writers and Illustrators Southern California 2017 Spring Retreat. My Harley stories have been published in Cold Noon Travel Diaries, Courtship of Winds, Blacktop Passages, Fresh Ink, and The Handlebar Star. When I'm not hitting the keys on my computer, you can find me camping at the beach with my husband, Frank, or holding onto him as we roar down the road on our Harley touring motorcycle.
View all posts by jrizzotto0808 →
This entry was posted in desert, Harley, Harley-Davidson, motorcycle, mountains, rides, travel, writer and tagged dayrides, Harley Owners Group, Harley-Davidson, HOGs, motorcycle, travel. Bookmark the permalink.

3 Responses to Back Roads to Pioneertown