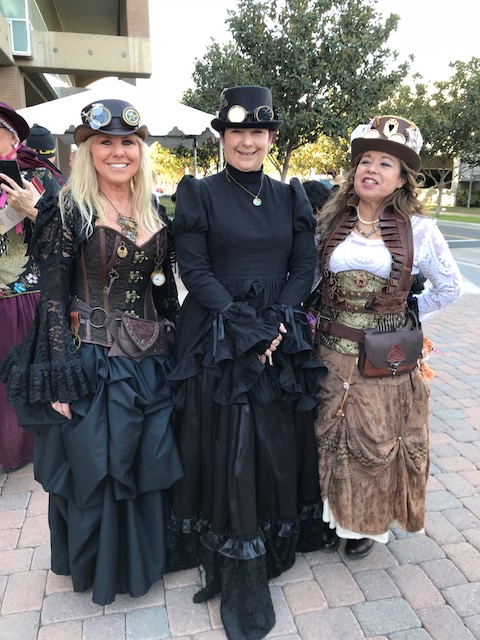 After nibbling on madeleine cookies with Edgar Allen Poe, I flagged down Jules Vernes to continue our debate on the dangers of time travel. It was nearly time for Queen Victoria’s parade, so I would have to forgo another trip to the tearoom. I thanked him for his time, and headed toward the courthouse steps, dodging ladies in tall hats covered with welding goggles, tightly cinched corsets and ruffled long skirts worn with cowboy boots.

Just another Saturday at the Riverside, California Dickens Festival. The California Writer’s Club had a booth next to the Author’s Corner, so we had a front row seat to a steady stream of Victorian era authors, played by actors, who engaged audiences in discussions about their work. Everyone who attended dressed in regular or steam punk Victorian costumes, making this the ComicCon of classical literature.

Being a more proper Victorian lady, I wore a puff sleeve black widow’s dress, which out of this context could pass for a witch or Mary Poppins costume. My character was a time traveler’s wife, so I also had a tall hat decorated with gears, netting, feathers, and brass gears. The bodice was form-fitted, especially since I had to alter it to fit my ungirdled shape. There are some things I will do for the sake of a costume, but a real corset is not one of them. I had also decided, with good common sense, against pointed toe boots and instead wore my round toe lace-up Harley riding boots.

Festivalgoers wandered by our booth, and looked at our selection of gently used books by Victorian authors. Their curiosity created opportunities to tell them about the California Writers Club and encourage them to come to a meeting at one of our branches across the state. I met some young writers, including a filmmaker who showed his work on YouTube and several sci-fi bloggers.

More cups of tea and hours later, it was time for me to return to the twenty-first century. Although I was grateful to take off the heavy layers of clothing, I was sad to leave behind my famous authors and the elegance of the Victoria era. Next year, perhaps I’ll get a chance to talk about monsters over tea with Mary Shelley. 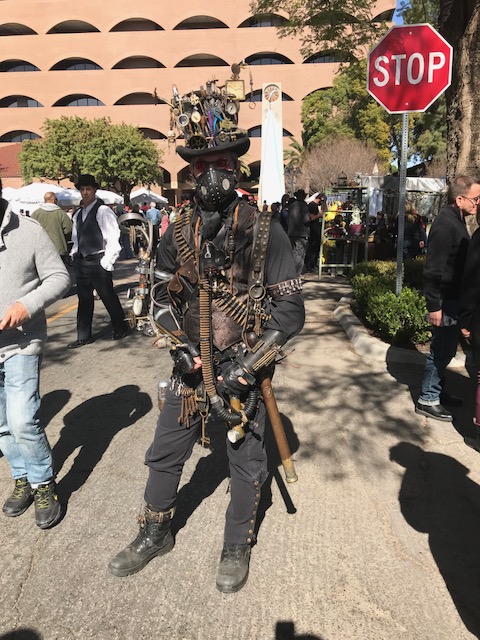 My day job as an elementary school teacher in Southern California supports my writing and Harley riding habits. My YA fantasy novel The College of the Crones, recently won an Honorable Mention Award at the Society of Children's Book Writers and Illustrators Southern California 2017 Spring Retreat. My Harley stories have been published in Cold Noon Travel Diaries, Courtship of Winds, Blacktop Passages, Fresh Ink, and The Handlebar Star. When I'm not hitting the keys on my computer, you can find me camping at the beach with my husband, Frank, or holding onto him as we roar down the road on our Harley touring motorcycle.
View all posts by jrizzotto0808 →
This entry was posted in books, Dickens Festival, time travel, Victorian, writer and tagged California Writers Club, CWC, Dickens Festival, time travel, Victorian, writing, wrtier. Bookmark the permalink.