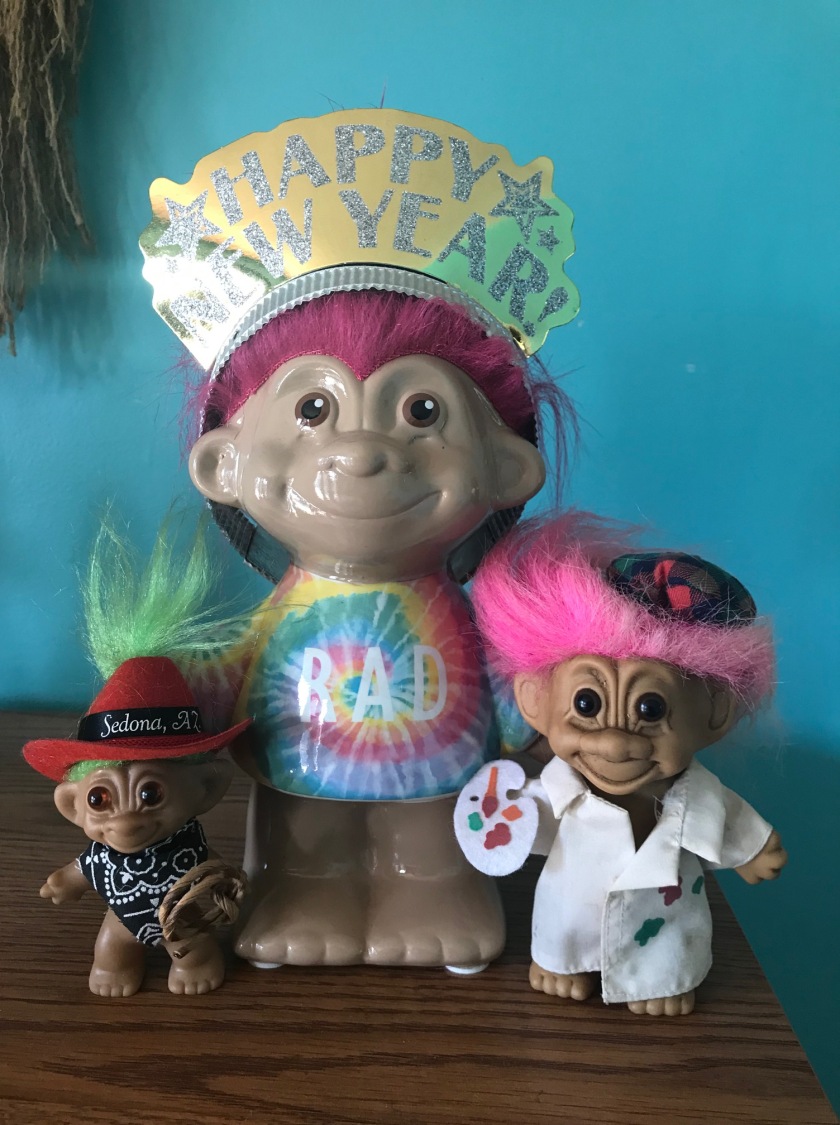 The past is a sidewalk chalk painting destroyed by a thundershower. Our lives storm with responsibilities, and urgent demands wash away our pleasant memories. To find ourselves again, we need to remember.

One of my joys as a kid in the seventies was playing with trolls. I was an anti-Barbie tomboy, especially traumatized by Growing Up Skipper. Trolls, with their wide-open eyes, pushed up noses, and squat bodies, were the perfect dolls to play with. They stood up on their own, unlike Barbie with her ballerina toes. It was easy to make clothes for them—cut out some felt and sew on a few snaps and you were done.

You didn’t need a Barbie Dream House to play with trolls. A few shoeboxes lined up, doors cut with scissors, empty thread spools and small jewelry boxes made perfect furniture. My best friend and I played trolls for hours as we created stories, the seeds of my writing passion.

One day we became teenagers and boys replaced trolls. We packed them away, boxes in the attic.

Now I’m a grandmother and my granddaughters play with Barbies. There are new versions of trolls, but they’re not the same. Looking at them sent me on a quest to find the original trolls. A phone call with my mom revealed she tossed my box years ago. How sad that I had not anticipated wanting to see them again. It was time to hit the thrift stores.

Years passed. No trolls in the thrift or antique stores. I found a few of the newer versions, but not my Wishniks with the horseshoes on the bottom of their feet. My stepdaughter sent me a large ceramic troll with pink hair and a tie-dye tee shirt. Awesome, but still not exactly like my trolls.

Then Modesto. While my husband and I were visiting my daughter in Northern California, we decided to hit some yard sales. We pulled up to an older ranch style home with a yard covered with boxes and tables. A large table covered with Halloween decorations caught my eye. Then I noticed Harry Potter collectibles on the next table. My daughter asked the homeowner if she had trolls.

“That big box by the garage.”

That’s where I found them. She didn’t have any of the two-headed ones, but it was a respectable collection. Older trolls, most 1980s versions, but stuffed into a plastic strawberry container, I found one of the originals. Smaller than my hand, wearing a cowboy hat, bandana, and holding a rope (no pants of course) was a Wishnik troll.

It’s smiling face made me smile. The hours of creating characters, worlds, and stories. Looking back across the decades, I can barely hear the echoes of my childhood.