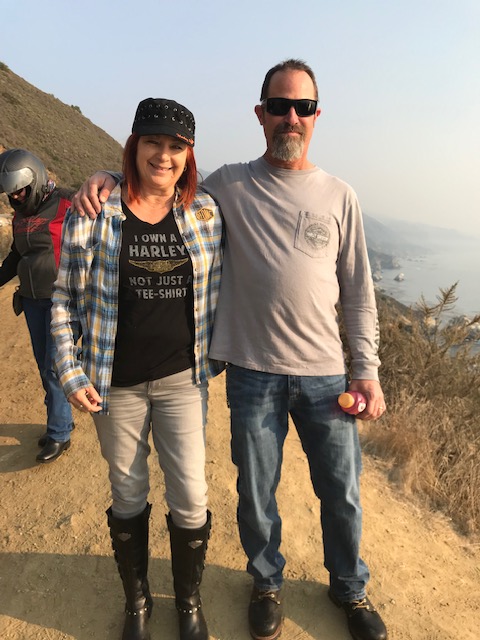 A black line of Harleys wrapped around the mountain, hidden in curves and revealed in straightaways. What was I doing, following in my Corolla, when I longed to feel the ocean wind bite while dancing the twisties?

Most of the time being a teacher is rewarding. Third grade enthusiasm recharges me daily. However, when my school schedule interferes with our riding schedule, grrr. Instead of sitting behind Frank on the HOG overnighter to San Simeon, my fate was to ride up in a cage, joining the others later.

Saturday morning, I followed Frank’s bike up to Monterey where we planned to meet our group for lunch bayside. We sipped coffee and watched sea lions play among bobbing sailboats at the marina. Gentle November sunshine kept us warm in spite of the brisk breeze.

I checked my watch. Almost noon. When were the HOGs going to arrive? I heard a low rumble from up the coast, building to a roar, culminating in the line of Harleys parading onto the wharf in search of parking spots. Every head turned, forks paused at mouths as people took in the sight of chrome and snarling thunder.

We joined our friends for fish and chips and listened to stories about the morning’s ride through misty wine country. They peeled off layers of leather in the bright sunshine, grateful to be warm at last. Everyone rested and refueled for the challenging road back to the motel on the famous Highway One through Big Sur. Then it was time to ride.

That’s how I found myself following them through massive forest, skirting bare edges of cliffs, crashing surf on my right. There was a steady stream of traffic, and no one seemed in a hurry to rush past the dramatic scenery. At every overlook point, some cars would pull off while others rejoined us.

This influx of vehicles separated me from the Harleys, as well as bicycles hugging the blacktop’s edge. Scanning the cliffs ahead, I couldn’t catch a glimpse of the HOGs. Knowing that the road would bring me back to the motel eventually, I continued on.

Finally, I came out from around a curve and sighted our group stopped in a large pull out area. I parked in front of them and got out. Jagged rocks rose behind us, waves foaming on the rocks below. No craft dared navigate the churning ocean here. It was a desolate place, defiant of man’s attempts to tame it. Gulls screamed in circles above us as the sun sunk down toward the horizon.

Frank gave me a hug, and a friend took a picture of us with the ocean gleaming in the background. Out of my car, I felt connected to the HOGs again. Even though I had missed the thrill of riding Highway One on our Harley, I wouldn’t have missed this moment for anything.