They’ll Never Understand Why We Ride 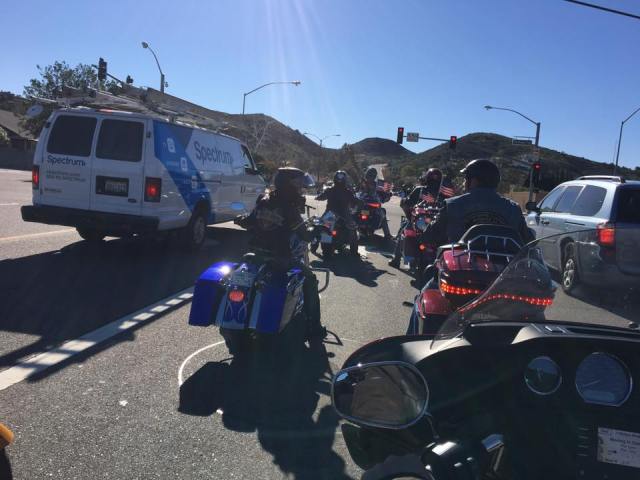 Even though my back was stiff, I smiled at my co-workers in the lounge. One of my teacher friends squinted at me and asked, “How was your weekend?”

“Frank and I rode with the HOGs through the mountains to Borrego Springs, around the edge of the Salton Sea, and back over the badlands. 300 miles! It was awesome!” I said, overwhelming her stupor with my residual energy.

Sipping from her jumbo cup of coffee, she waited for my wave of enthusiasm to roll over her. “Wow, isn’t that really dangerous? Just last week, I passed by a motorcycle accident on the freeway. I’m sure they didn’t make it.” She shook her head, and then saw that the copier was open, so she ran for it with her stack of papers.

So I glimpsed the great divide between those who love to ride Harleys and those who think we are crazy.

When Frank and I first married, he told me about his years of riding different types of motorcycles, starting with his early dirt bike days. He would ride all day with his friend until the impending night forced them back to the house. Later, riding became his release, a way to work out his negative energy. But hard times forced him to sell his bike before we met. As we began to share each other’s dreams, I realized that one of his was to own a Harley.

At first he just wanted to find out whether or not I would enjoy riding behind him. My only experience on a motorcycle was as an eleven year old, hanging on behind my father on a vacation in the Bahama Islands. (More like an amusement park ride than a real motorcycle ride.) So we started with a scooter– fun but not very fast. Frank was a confident rider who inspired my confidence in him. Then we moved up to a small motorcycle, which gave us access to mountain roads. Wind rushing in my face and the rhythm of twisty roads reminded me of my skiing days. We enjoyed the ride, but looked hungrily at the full dresser motorcycles that rumbled by, their riders sitting comfortably behind a wind shield, sitting on full seats.

Finally, we had to do it. We bought a Harley, and even my husband, with all his experience, wasn’t prepared for how our lives changed.

For you see, buying a Harley doesn’t just gain you a mode of transportation. It initiates you into a worldwide club. Every Harley you pass on the street greets you with a secret gesture I’d never noticed before as a car driver. Now we had social permission to wear Harley Davidson jackets, hats, and tee shirts. The orange and black emblem started conversations with the most unlikely people we met. The dealership, not merely a place where we purchased our bike, became our club house, complete with donuts and coffee, bike shows and other events.

As we rode, we saw groups pass us with their patches on their jackets and their sense of purpose. Riding was fun, but riding with a bunch of bikes sounded more fun. We sought out other responsible riders who wanted to have fun and live to get there. So we joined the HOGs, the Harley Owners Group. Experienced road captains plan the rides, from the route to the restaurant. Members help out with community charities, and participate in overnighter trips as well as day rides.

But the HOGs are more than that. We have discovered friends that we would never have encountered in our regular lives, comrades who brave heat, cold, wind, and loose gravel to explore forgotten roads. Roads through avocado groves, vineyards, and boulder strewn sculptures. Roads that lead to famous road house diners and more of our kind. People who love their adventure on two wheels.

And their co-workers in their break rooms shake their heads and don’t understand why we ride.

My day job as an elementary school teacher in Southern California supports my writing and Harley riding habits. My YA fantasy novel The College of the Crones, recently won an Honorable Mention Award at the Society of Children's Book Writers and Illustrators Southern California 2017 Spring Retreat. My Harley stories have been published in Cold Noon Travel Diaries, Courtship of Winds, Blacktop Passages, Fresh Ink, and The Handlebar Star. When I'm not hitting the keys on my computer, you can find me camping at the beach with my husband, Frank, or holding onto him as we roar down the road on our Harley touring motorcycle.
View all posts by jrizzotto0808 →
This entry was posted in adventure, clubs, friendship, Harley, marriage, motorcycle, rides, writer and tagged Harley, HOGs, motorcycle, travel. Bookmark the permalink.

3 Responses to They’ll Never Understand Why We Ride