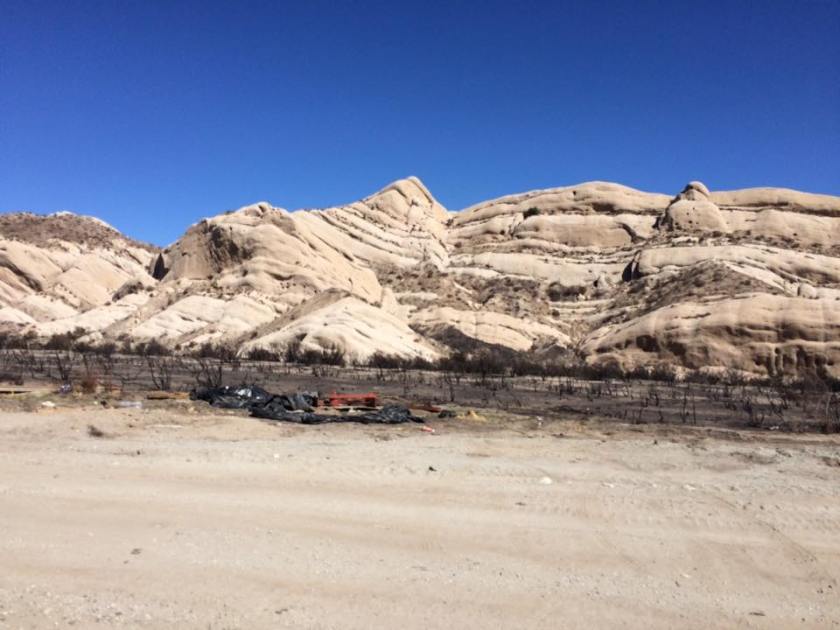 The snarling Harley group poured off the freeway and onto the back road that led toward the mountains. Eighteen bikes made it tough to stay together, so the ride captain split us into two groups, each with a captain and a sweep. As we started down the two-lane highway, both groups spread out so that our numbers stretched along the dips and rises of the road all the way to the horizon.

Seated behind my husband, I snapped pictures of the desolate high desert wilderness that surrounded us. A few months previously, a vicious wildfire had ravaged the area, and charred Joshua trees stuck up like stubble on a man’s chin. Dirt roads led off from the highway to lonely chimneys poking out of blackened debris. Trailers sat tethered to the remains of ranch homes. Here and there a house stood on a hill, pristine and untouched. I wondered if firefighters had spent precious water to save the structures, or if God’s judgment had passed them by.

Miles and miles of burnt bushes and trees filled my camera lens, boasting of the fire’s destructive power. I zipped my phone back into my pocket and turned up the Crowder album I had playing in my earbuds. Anywhere I looked my eyes couldn’t escape the chaos. All the overwhelming stress of my life seemed to chase me through the desert –Common Core Standards, screaming parents, bulging school schedule, the new house cleaner that scrubbed the paint off my stove and broke my fairy statue. Even our Harley couldn’t outrun these demons.

But then the music chanted “We Shall Overcome,” and I saw something strange. There were fresh prickly shoots coming out of the black Joshua tree trunks. The wildfire had not killed the trees at all.

The road captain gestured to the left which was repeated down the line of riders. We turned onto the road that would lead us further into the back side of the mountains. Now the road began to twist its way through pine trees. Evidence of the fire diminished until we were immersed in a sea of green. Singed air gave way to a fresh pine aroma, and I took a deep breath.

Finally A-frame cabins and two story homes with railed porches popped out of the forest. We had arrived in Wrightwood, a small ski town north of Los Angeles. Since the November weather was still pre-snow, the town was comfortably uncrowded. Our lunch destination appeared on the left and we turned in, patiently finding places to park our pack of bikes.

The waitress frowned at the size of our group, but barked orders to the bus boys to quickly push a bunch of tables together for us. Then we peeled off jackets, gloves, and outer layers to sit down for a bite. I looked around the table at our riding group. Some of us were married, some remarried, some single through death or divorce. If I looked carefully, I might see the black scars of life’s fires beneath the smiles. But it was covered with life—new and vibrant, full with promise. The roar of a Harley, wind in our faces, and we pressed on toward new adventures on the twisty road we traveled.