The Day I Became a Writer 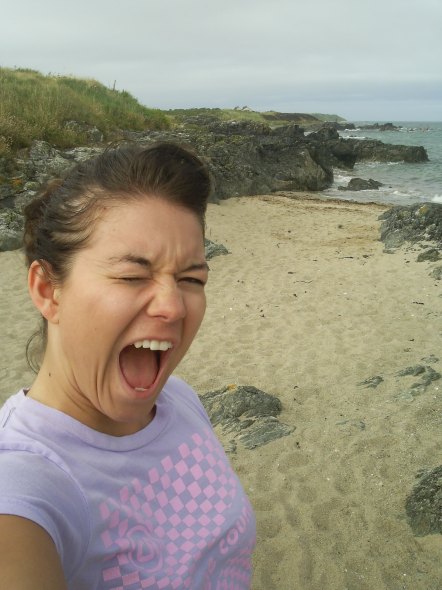 I became a writer one day in Ireland, standing on slime covered rocks squinting over at France. Actually I had written many stories during the course of my forty years, but that windy beach changed me.

My daughter, Kristin, and I were five days into an eleven day quest through Scotland and Ireland. I was collecting research on castles for a book, and I liked seeing them in person more than looking at pictures on the internet. Earlier that week, we had toured Edinburgh Castle, and were now driving through the back roads of Ireland on our way to Blarney Castle.

I had rented a car in Dublin with the encouragement of our travel agent who assured me I would quickly learn how to drive a left handed stick shift on the opposite side of the road. How lost could you really get on an island? The day I picked up the car, Kristin and I learned the answer for over two hours before accidently passing our hotel, thanks to the one way streets and tiny street signs that were tacked to the sixth floor of the brick buildings at every major intersection. After a moment’s embarrassment at the front desk when I learned they were about reading to send out the Gardai to find us, I consoled myself that driving in the country would be much easier.

With the July sun shining in our faces, we headed down the east coast toward Rosslare Harbor, where we had plans to stay at a dairy farm that was also a bed and breakfast inn.  Still feeling the sting of yesterday’s mistake, I made Kristin official navigator. She carefully studied the map, which was twice as interesting since the town names were both in Gaelic and in English. We managed well until we reached the roundabout outside of town. Turning right into the circle of cars, it was the merry-go-round on the playground all over again. I merged into the spinning swirl of cars until we jumped out onto the road I thought would lead us to the dairy farm.

The other difficulty about driving in Ireland is that once you are on a road there are no road signs to reassure you that you are indeed on the correct road. Only when you arrive, an hour later, at the next medieval town do you realize that you should have stayed on the roundabout one spoke farther to the right. Since this was before phone navigation, we stopped at the only place you could ask directions – the pub.

Forty five minutes later, after we had shared stories with the old men who seemed to live at the pub, we were headed in the right direction. When we finally passed the old oak tree, turned right at the corner where the white cows stand, and turned left at the golf course, we ended up at our destination. A two story brick and wood house with a tall chimney, surrounded by barns and other buildings popped up between the hills.

After sipping tea with our hostess, Kristin and I decided to stretch our legs by walking to the beach. We followed the low stone wall all the way to the end, as instructed, passing black and white cows and sheep with pink spray painted on their rear legs. A narrow dirt path led us through waving tall grass, between randomly tossed chunks of rock, until we came out to a deserted beach.

Waves crashed over slippery black rocks, creating fountains of spray. We climbed out on the rocks as far as we dared, braving the icy spray carried in the breeze. Looking out to sea, we could see the outlines of cruise ships and cargo ships on their way to Europe.

“Ireland!” Kristin yelled over the crashing surf. Here we were, around the world from California, standing on the beach of the land that birthed many writers. They were my ancestors, and I had come home.

At this point in my life, my identity had been shaken. I was no longer a wife. My husband’s relatives and friends had faded away in grief. My career in retail buying had been swept away, and replaced by a career in teaching. My children were growing up and independent, leaving me with empty time. Time to write.

Standing there on that slippery rock, in the land of my ancestors, I suddenly knew that I was a writer.

My day job as an elementary school teacher in Southern California supports my writing and Harley riding habits. My YA fantasy novel The College of the Crones, recently won an Honorable Mention Award at the Society of Children's Book Writers and Illustrators Southern California 2017 Spring Retreat. My Harley stories have been published in Cold Noon Travel Diaries, Courtship of Winds, Blacktop Passages, Fresh Ink, and The Handlebar Star. When I'm not hitting the keys on my computer, you can find me camping at the beach with my husband, Frank, or holding onto him as we roar down the road on our Harley touring motorcycle.
View all posts by jrizzotto0808 →
This entry was posted in book, books, novel, ocean, teachers, travel, writer, writing and tagged books, writing. Bookmark the permalink.