The Layers of a Ride 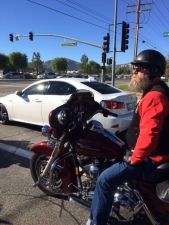 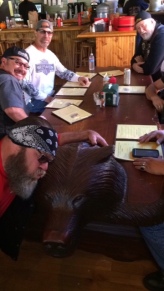 The sun has only risen for a half hour, and I feel the chill against my legs as we ride to the first meeting place. I peek around my husband’s head, my arms wrapped around him. Frank feels tense as my legs hug his hips. He hates being late, and a train forces us to take an alternate route. As we pull in, there are two men in leather vests waiting by their motorcycles. One is sipping coffee and the other is scraping a quarter against a lottery scratcher card. As we pull off our helmets, we are relieved to learn that we’re early, since we don’t need to be at the next meeting place for an hour.

I’m riding with these guys for the first time. Technically, I’m a passenger, and the only woman riding today. They both are in full biker club garb- leather vests held in front with chains, club patches on the front and on the back. I notice their nicknames are sewn on patches on the front so I’ll have an easier time keeping their names straight. Although the shorter one with the thin handlebar mustache would be hard to forget with his name Ezee.

The other one is their president, and seems to have won that position with his quick jokes and colorful put-downs. His nickname is Slinger. All seems to be in fun, I notice with relief since they have knives strapped to their belts. My husband with his gift of gab flows easily into their conversation, which I have to believe, is toned down with a woman present.

The three of us head off to meet the rest of the group at Jack-in-the-Box one town over. Ezee takes point, we are in the middle, and Slinger has sweep. It’s a quick trip down the freeway, the sun glinting off our helmets. The snarl of the Harleys’ pipes announces us as we sail down the open freeway. Cool air pushes up under my helmet, making my eyes water, but keeping me awake. We pull into the parking lot to find we are the first to arrive. Fortunately, that means a quick breakfast and more coffee.

As we take off our helmets, Frank notices that the car parked next to us is smoking under the hood. A young woman was inside the car on her cell phone, her face drawn and pale. She gets out of her car, still on her phone. Slinger walks over to her and offers to look at her car. After a few moments under the hood, he even gets on her phone and reports his diagnosis to the woman’s grandfather on the line.

Meanwhile the rest of the guys roar in. One of them is so big his motorcycle looks like a toddler’s push bike. As he takes off his helmet, I see that his name patch says T Rex. One biker is on a bright yellow futuristic looking Victory motorcycle. Another one is on a low slung black Harley. The man named Bear has a full bushy beard and his hair pulled back with a blue bandana, which he wears under his half helmet. All of them wear leather vests with the club patch and plaid shirts. The joking starts as soon the engines turned off, and I can see that these men are as close as brothers. Their exteriors are rough, but I can see that they have tender hearts.

The ride captain, T Rex, consults his maps, and sets up the order for the ride. After a short prayer, we are headed to Julian, down the backroads beyond Temecula and into the wine country. After escaping the gathering traffic in town, we sigh in relief to be on the open road, free from traffic lights. My husband and I are third of eight bikes, a smaller group than usual. The point guy signals our lane changes and turns, while the sweep pulls over first, creating open space for the rest of us. Although it appears that we are all just riding on our own, there are rules that must be followed to ensure the safety of the group. The rumbling all around me reminds me of traveling in a wolf pack.

Hours pass and we finally roar into the former gold mining town of Julian. There are already dozens of motorcycles parked on Main Street. People bustle around in groups, stopping in the craft shops or standing in line for a piece of Julian’s famous apple pie. We pull into the predetermined BBQ place and sit down at a long wooden table that features a carved bear head at one end. It is so long that all of us can sit together. The tangy smell of BBQ sauce floats on the air and promises delicious food to come. When we are served, amongst a lot of kidding around with the good spirited waitress, these shaggy men bow their heads and pray over the food. The tri tip sandwiches don’t disappointment, and the table talk is quenched as everyone chows down. After lunch, I quickly duck into the women’s restroom to get out of my long underwear. It’s plenty warm now with the cloudless sky overhead.

After a bit of shopping, in which I buy new leather fingerless gloves and Slinger finds a new leather sheath for his knife, one of the guys needs to head back. The rest are lined up to order pie, so Slinger decides to ride back with him. No one should ride back alone was another rule. We enjoy our pie and head back down the mountain.

As the rolling valleys passed by, I marvel at these bikers, men that outsiders might scorn or even fear. Just as I peeled off my layers of clothes over the course of the day, I had the opportunity to peek through the layers of these bikers. Their brotherhood is true, and yet they also have time to serve a stranded traveler or allow a child to have their photo taken on their bike. My husband and I welcome the opportunity to ride with them again.

My day job as an elementary school teacher in Southern California supports my writing and Harley riding habits. My YA fantasy novel The College of the Crones, recently won an Honorable Mention Award at the Society of Children's Book Writers and Illustrators Southern California 2017 Spring Retreat. My Harley stories have been published in Cold Noon Travel Diaries, Courtship of Winds, Blacktop Passages, Fresh Ink, and The Handlebar Star. When I'm not hitting the keys on my computer, you can find me camping at the beach with my husband, Frank, or holding onto him as we roar down the road on our Harley touring motorcycle.
View all posts by jrizzotto0808 →
This entry was posted in brotherhood, clubs, motorcycle, rides and tagged black sheep, motocycle, ride. Bookmark the permalink.

1 Response to The Layers of a Ride