First there was the gathering. One by one the Harleys roared into the parking lot, and riders popped off their helmets. They joined the circle standing nearby, which grew minute by minute until the magical KSU time. Old friends met some new friends; names were exchanged, as well as handshakes and hugs.

Suddenly, the appointed time arrived, and riders scattered to their motorcycles, adding layers of leather, earphones, and helmets. The dog pack obediently emptied into the street, patiently holding back the thunderous power that its riders sat astride. The bikes passed through the gauntlet of traffic lights and stop signs, growling with anticipation.

At the appearance of an open road, each bike roared as it took off, eager to stretch its legs in the desert. In the backyard of the city, each twist and turn brought cobbled together mobile homes or spreading mansions into view. Both poor and rich shared the dream of the pioneer—build on the land and claim it for your own. Brick and wrought iron fences did not prevent us from viewing the piles of toys inside, apartment sized travel trailers, boats, vintage cars, and off road vehicles. The next turn revealed boarded up and crumbling shacks that told the story of dreams cast aside.

The road climbed up the side of the desert mountain, and I peered cautiously over the edge. The lake below us was wreathed in mist, deep navy blue. As I looked up, I was dazzled by the snowcapped mountains in the distance. Yesterday, my boots crunched in the January snow up in those mountains, but today I rode behind my husband on our Harley in 60 degree sunshine. Again I was reminded why Californians find it difficult to be transplanted in other states. We take our climatic diversity for granted.

With the top of the mountain reached, the snarling pack of Harleys threaded themselves through the narrow pass between the peaks. The tree covered mountains stretched before us, looking like a fleece blanket thrown over unknown items. Their mystery remained unrevealed to us as we sped past them, concentrating on the curves of the road. The wind rushed in our faces as impatient sport bikes passed through our line, determined to push the boundary between the capability of their motorcycles and eminent death.

After some time had passed, the mountains spit us out into the hills near the beach. The pack turned, and we enjoyed the tame shrub dotted hills after the rugged pass. The wide, multi-lane road, bordered with elaborate landscaping, spoke of the area’s affluence. The major intersections boasted stores on all four corners, including upscale fast food restaurants. After all, after Mommy’s busy day at the office, or shopping, she doesn’t have time to cook.

A few turns later, we left the red tile roofs and bird of paradise behind and dropped down into a narrow canyon. The crowded big box houses gave way to sprawling ranches nestled under towering oak trees. Elegant horses lounged in white fenced corrals. Bicycle riders in full racing gear shared our mud streaked road. Our Harleys obediently slowed on hairpin turns as we crawled to the bottom. I realized how close we were to the beach when I saw the hull of a large boat under construction in someone’s front yard.

A long line of parked motorcycles signaled the end of our journey, Cook’s Corner. We pulled up next to custom choppers, full dresser cruisers, and lean sportsters. Live music called to us from the patio, smells of hamburgers and fries caused my stomach to rumble. After I peeled off my chaps and stashed my gloves and helmet, I followed my husband and our fellow riders across the wooden bridge. A carnival atmosphere assailed us with booths selling motorcycle clothes.

Inside, men, many bearded and wearing hats, were crowded at the bar, cheering at the flat screen displaying a football game. Spandex coated bicycle riders, an older gentleman in a wheelchair, and bikers with leather jackets announcing various motorcycle clubs all patiently waited in line to order food. A man at the bar turned back to tell my husband, “You see those guys in line? They’re part of this riding club. The dealership sponsors them.” With a laugh, my husband shows the man his patch, and they exchange a few more words.

After picking up our tray of food, we joined the rest of our group seated at a long table outside. The band was cranking out classic rock on the patio a few steps above us, but we were far enough away to enjoy conversation. Looking around, I was again amazed at the variety of people gathered at this place. Not all motorcyclists, yet sharing the love of spending time outdoors on a sunny winter afternoon. For this moment, it was enough to connect us. 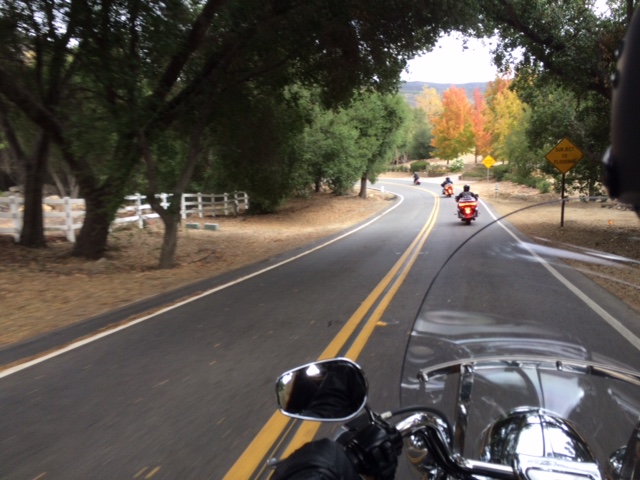 The Harleys snarl and eat up the road as the long line of motorcycles climb up the hills. My husband’s helmet only partially blocks my view as we pass open fields of scratchy bushes and dried out grass. The mountains on my right loom menacingly, covered with dark clouds. Would we accomplish our quest before the downpour? Various weather sites disagree but we ride anyway.

The constant roar becomes a buzzing droning sound as more miles are vanquished. A bright yellow road sign stands out in the grey meadows– Steep Grade Ahead. Our ride captain briefed us earlier about this. His battle plan- down shift, hold the back brake, and make sure to leave plenty of space between the bikes. My stomach clenched slightly as we zoomed past the sign.

Suddenly, brakes lights flash ahead of us. The road, which had been squeezed between massive boulders, instantly opened up to a series of rolling hills and valleys. We head down the roller coaster pitched road with respect. Our frontal view includes dotted hills of avocado trees, wooded glens, white fenced ranches, and immense stone mansions that ruled their acres of land. The road is so steep that my husband’s helmet no longer blocks my view. Memories of horseback riding on mountain trails flooded my mind. I had to trust the horse back then. Now it’s my husband and his trusty Road King that must carry us safely to the bottom.

At a snail’s pace, I have plenty of time to enjoy the panorama unfolding around us. The Harleys follow each other like a dog pack, growling but obedient to the alpha. After some time, somewhat longer than I could hold my breath, we reach flatter ground. The captain pulls over to wait for the bikes emerging from the hill. One by one they join him in a line at the side of the road. My husband tosses a smile back at me, the kind of grin little boys wear when they’ve made that big jump with their bicycle.

I am surprised to realize that my smile mirrors his.

Because of pneumonia, I saw three deer in the forest.

Six long months ago, I booked our camping trip at the beach. Those of you who have made reservations at California state beaches know the degree of difficulty is at least an 8. But I did better than that– I booked one of the sites directly on the cliff at Carlsbad. These camping spots are wide, and trailers are allowed to park sideways so that your dining table window is facing the ocean. In order to secure those sites, you have to be on the ReserveAmerica website at exactly 7:55 am on the first– wait a minute! I’d better not reveal my secrets.

Six months later, time is approaching for our trip. The October weather forecast is promising days of 80 degrees and nights down to 60. Perfect. I’ve made my camping checklist, scheduled each day to do part of the prep work. School’s been tough, and I’m ready to check out of the desert for a weekend.

Three weeks before the trip, our six year old grandson goes into the hospital suffering pneumonia. His mother, my husband’s daughter, is a nurse practitioner, so we know she’s on top of everything. All of the family takes turns visiting him. After a week of treatment, the doctors send him home. Everyone takes a sigh of relief.

But one week later, our grandson goes back into the hospital again, sicker than he was at first. Raised voices from his parents produce a specialist who determines that our grandson’s lungs need a procedure. By now, his mother, who knows too much, and did I mention she’s in her first trimester of pregnancy, has become officially hysterical. (Who could blame her?) Her husband has now become the last sane person standing. Family members come and go to the hospital, like the changing of the guard.

A few nights before our camping trip, my husband and I look at each other. How do we dare leave the area while all this was going on?

I called and cancelled the reservation.

Meanwhile, our grandson started to recover, and that weekend, the weekend we had planned to go camping, he was allowed to leave and receive treatments at his home. Sunday the family was getting together to celebrate. But we had Saturday free.

A friend called and asked us to ride with him up to the mountains. After all the tension of the past weeks, we were ready to jump on our Harley and escape the heat. We rode up Highway 18 to Lake Arrowhead for lunch. We sat outside eating sandwiches, enjoying the sunshine and crisp cool air. After that we rode through Big Bear Lake. Our friend suggested we take Highway 38 through the mountains down to Yucaipa, a little used road that served as the access to a few campgrounds and fire roads.

Leaving the traffic of Big Bear behind, we cruised up the narrow winding road that would through the towering pines. Forest surrounded us on either side, and for most of the way there were no other cars. We swooshed back and forth in the curves like snow boarders. Lulled by the hum of the motorcycle engines and the rustling of the trees, we settled into the rhythm of the road.

Then three small heads with pointy ears turned our way from the forest’s edge. We had startled some young deer, which stared at us with suspicion, and then showed us their white tails as they bounded away. Although we had frequently visited our local mountains, this was the first time we had been far enough away from humans to catch sight of any wildlife.

If not for our grandson’s pneumonia, we never would have seen them.