This story is another assignment from my UCLA class. We had to write a magical realism story that incorporated a scientific process to reveal a character. 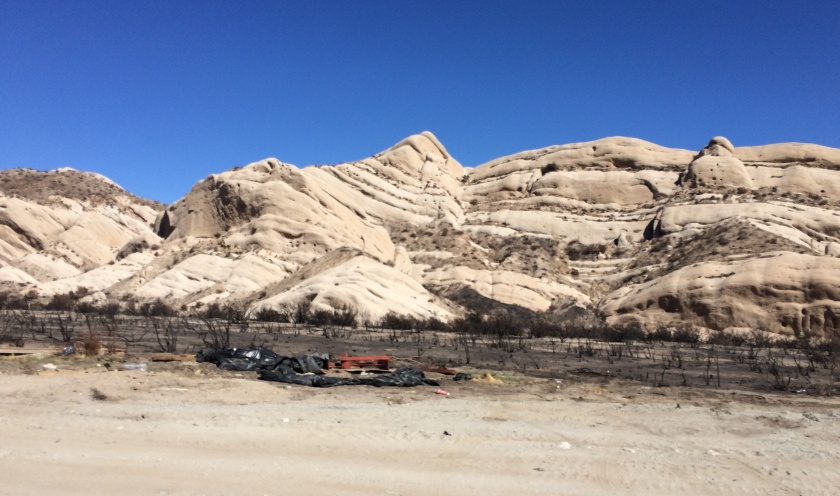 It started as a trickle down my cheek. I was changing a tire on my sand rail in the third bay of our garage. I wiped away flesh-colored sand from my face. What was that? No time to worry about it. We were leaving for Glamis in the morning, and I still needed to load up Susan’s sand rail.

The weekend started well, as we joined our friends and drank by the campfire until the horizon brightened and the stars began to fade. Then we all stumbled into our trailers and slept it off. When I got up much later, there was coating of sand in my bunk.

That day I’ll never forget. Susan and the girls went out on their rails by themselves. Barely an hour passed when one solo sand rail came racing into camp. One of Susan’s friends took off her helmet, exposing a tear-streaked face.

“Jeff, I don’t know how to tell you this,” Marley said. “We went over this ridge, and there was a huge sink hole! I stopped in time, but the rest fell in. I helped them get out, but Susan didn’t make it.”

A large clod of dirt dropped off my back. For once, I was speechless.

After calling on my sat phone to transport Susan’s body, I packed up the trailer and remaining sand rail by myself. Our friends had just started the barbeque and were preparing to grill steaks. They barely looked as I pulled away, as I had become a major party killer.

The truck came out of nowhere as I entered the main highway. Clods of dirt fell from my arms as the air bag deployed and I woke up in a mist of white powder. When the fire fighters pulled me out, I looked at the twisted pile of metal that used to be my weekend getaway. Somehow, I felt lighter. Piles of sand and dirt surrounded me. The paramedic led me back to his rig, and I finally plucked up the courage to ask about the gathering piles of dirt.

“Probably erosion,” he said as he checked my vitals. “It happens. You’re lucky you made it out of this one alive. Do you have a wife?”

My throat closed up. “Until this weekend,” I managed to choke out. What was happening to my life? My wife was gone. My truck, trailer, and toys were gone. I felt the release of another chuck of dirt from my back as I lost myself, pebble by pebble.

When they finally released me, I called my neighbor, and he drove out to pick me up. His face was white. “Dude, you’re never going to believe this!”

Somehow I felt that I had gone beyond all reasonable belief. Sand burned in my eyes.

“Your house,” he said. “While you were out in the desert, a fire started! Your house, your beautiful house, burnt down, to the ground. The fire fighters were able to save mine and the other houses on the street, but not yours.”

My heart fell to the ground. My now deceased wife’s voice echoed in my mind, harping at me to renew the fire insurance. I remember telling her I was waiting for a cheaper quote from one of my buddies. The house had no insurance. More clods of dirt fell off and my clothes became so loose that I had to clutch my pants before I lost them.

On the way home, actually to my neighbor’s house, we barely spoke. If my neighbor noticed the deepening piles of sand on the seat, he didn’t say anything.  All the things that held my happiness—my wife and all my possessions—wiped away in a single weekend. Even though I wasn’t a religious man, I knew about Job, and I wished I could talk to him. What is leftover, after everything is gone?

When we got to my neighbor’s house, I looked at the smoldering pile of ash that used to be my luxurious home. My neighbor’s sister, Annie, came rushing out.

“David, I am so sorry,” she said, with watery eyes. “Poor Susan. And your house!” She hugged me, and more clods fell off. “What happened to you? You’ve lost a lot of weight.”

Days passed and then weeks. I was busy with Susan’s funeral and taking care of the paperwork on all my lost things. When I looked in the mirror, I barely recognized myself. Dirt had stopped falling. Instead of the heavy-set, beer belly partyer I used to be, I was a pale, thin, balding man. My neighbor and his wife, Frank and Jan, took me with them to their church, and I never missed a Sunday. Suddenly eternal things mattered. My Glamis friends never called, and I was surprised that I didn’t care.

The process of erosion is slow. I worked hard, saved money, and bought myself a new house, in an older neighborhood because I couldn’t afford it on my own. On weekends, I worked in the garden, and invited over Frank, Jan, and Annie for burgers in the backyard. My garage didn’t house any flashy toys. They had washed away, but the core remained. I had my health, faith and real friends. That was enough.

One thought on “Erosion”