Review of “The First Monday in May” 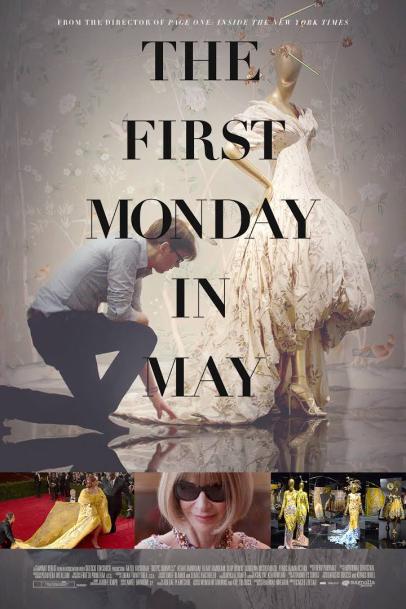 When I first saw the trailer for this documentary, I thought it would be just another reality T.V. show, with people tearing out their hair and swearing at each other. I had no idea that it was a love story.

“The First Monday in May,” directed by Andrew Rossi is a series of interviews and behind the scenes negotiations leading up to the 2015 New York Metropolitan Museum of Art’s Gala. The viewer gets to ride along with Andrew Bolton and Anna Wintour as they navigate the numerous decisions that will result in the Costume Institute’s exhibit “China Through the Looking Glass.” Anna Wintour is the dragon lady of this story, the real life inspiration for the book and movie The Devil Wears Prada. If the movie would have focused on her harsh decision-making character, it would have been difficult to watch. Instead, her infamous public image was downplayed, keeping the focus on the Gala.

As the movie unfolded, I was drawn into the romance between Andrew Bolton and his exhibit. As he interviews the designers who contributed costumes for the show, I could feel how captivated he was by his project. He hangs on every word from designers from Dior, Yves St. Laurent, and Chanel, gasping with delight as they display their creations. We follow the courtship between Andrew and his exhibit from Paris to Beijing. Chinese officials he meets show stone faces like overprotective fathers. But his words were passionate and pleading, ensuring their support.

As designers send their creations to the museum, every outfit is handled gently by workers with paper lab coats and latex gloves. Costumes were hung in sterile white closets like precious pieces of art. One of the most beautiful pieces was a long gold sequin dress with a train longer than any wedding dress I have seen. As the clothes were mounted onto abstract, faceless mannequins, they became alive.

The preparations for the Gala dinner seemed no different than wedding planning, as Anne’s assistants labored over the seating arrangements for celebrities and fashion industry giants. As the time grows closer, unforeseen problems with the lighting set the installation schedule back. In a reality series, this would have been the place where we saw the main character with his head in his hands, walking out the door, or screaming at the workers.

But this is the Met, and it is a love story. Andrew was willing to do whatever it takes to win his bride without complaint. His staff, the brides-maids and best men, work long hours to make Andrew’s vision come into reality.

At the unveiling of the show, the viewer gets to see some of the 50,000 costumes that were included in the “China Through the Looking Glass” exhibit. It starts with the wedding guests arriving on a red carpet, humming with the opulence of celebrities in designer dresses and tuxes. Beautiful women preen themselves before the cameras and reporters on their way up the stairs to the museum. Everywhere there is chaos of people laughing, drinking, and fake-hugging each other.

But we are allowed a more intimate view with Andrew as he walks alone through the completed exhibit, romantic music in the background. As the gowns glisten in the spotlights and pose against ancient Buddha statues, we can’t help but believe that his exhibit, his work of art, loves him back.

My day job as an elementary school teacher in Southern California supports my writing and Harley riding habits. My YA fantasy novel The College of the Crones, recently won an Honorable Mention Award at the Society of Children's Book Writers and Illustrators Southern California 2017 Spring Retreat. My Harley stories have been published in Cold Noon Travel Diaries, Courtship of Winds, Blacktop Passages, Fresh Ink, and The Handlebar Star. When I'm not hitting the keys on my computer, you can find me camping at the beach with my husband, Frank, or holding onto him as we roar down the road on our Harley touring motorcycle.
View all posts by jrizzotto0808 →
This entry was posted in movie, writer, writing and tagged writing. Bookmark the permalink.